Motilal Oswal has launched an NFO (New Fund Offering) for its S&P500 Index Fund. The NFO is open from 15th to 23rd April 2020. We took a look to see if it make sense for Indian investors.

Short Answer: The launch of a fund tracking a major US Index is a step in the right direction. But it’s not necessarily the best way for Indian investors to invest in the US.

Let’s make sure we’re clear on the reasons.

The S&P500 has outperformed the NIFTY more times than not over the last decade. With INR depreciation, the difference is even more stark. Those points are well-documented in the NFO pitch document.

But that still doesn’t make it the best vehicle available to Indian investors.

First, should you invest in stocks of countries outside India?

India is a small pond

At nominal GDP of USD 2.9 Trillion, India is at #5 (the chart shows India in the 6-10 bucket probably because we only recently went past UK.

The United States is 8x India’s economy. And that’s in absolute terms, not even per capita. India has been barely growing faster than the US on a much smaller base, so it’ll be a while before the Indian economy is comparable to the US in terms of size.

India’s largest company by market cap, Reliance Industries, at $101.99B, would be #74 in a list of US companies. It would be in the US equivalent of the Nifty Next 50.

Is the S&P500 the best vehicle to buy the best businesses?

If there were no other means of investing in the biggest economy in the world, with a 0.5% proposed expense ratio, this would be a good pick with some caveats.

But there is a better alternative. The biggest Nasdaq companies (Nasdaq 100) have handily outperformed the S&P500 over the last 20 years. 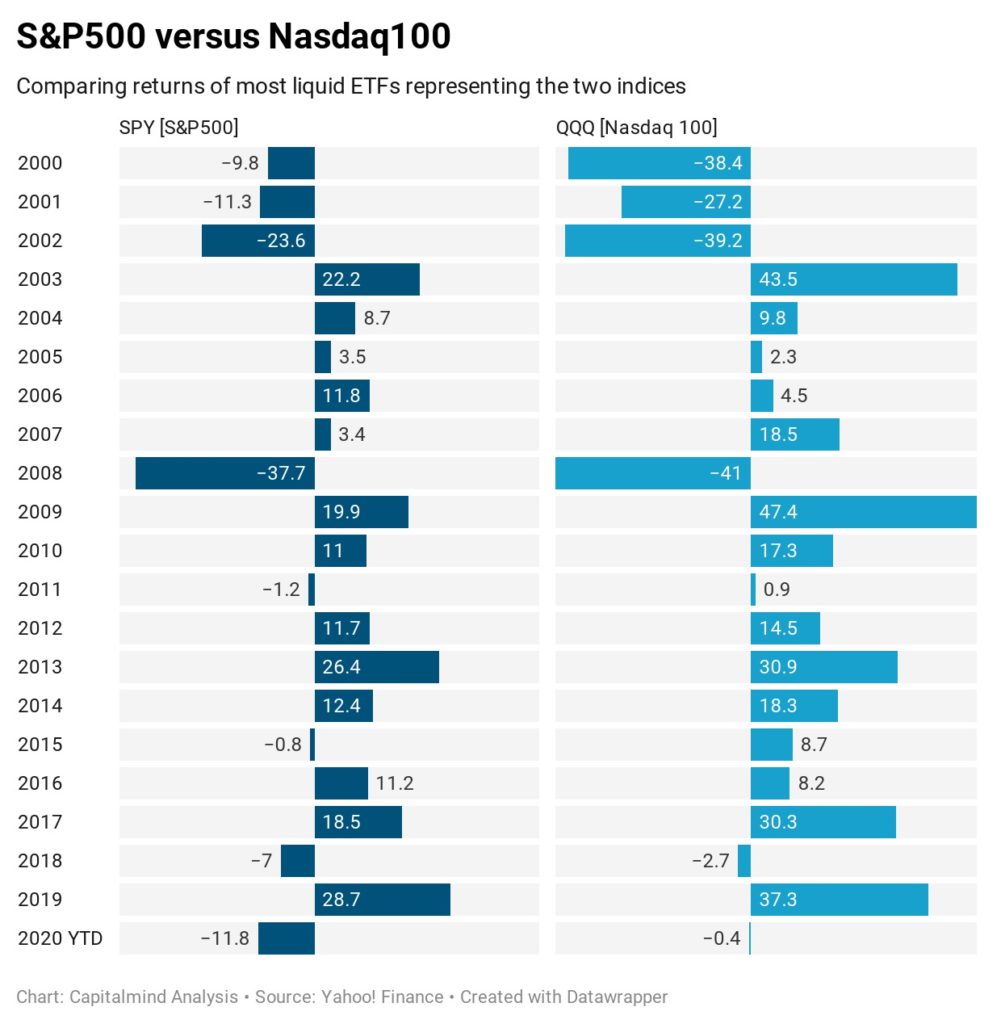 Even when starting the comparison at a particularly bad time for the Nasdaq, the dotcom crash, it still beats the S&P500 13 of the 20 years (and also in YTD 2020 performance).

Notice, how after 2002, the Nasdaq has outperformed handily and has had comparable drawdowns as the S&P500 in down years.

No, the Nasdaq is not all “tech” companies

There’s a perception that the Nasdaq is all software companies with all hype and no earnings. That was probably true in 1999 where everything with a website was bid up hundreds of percent in weeks. Not any more.

It doesn’t hurt that Amazon, Alphabet, Intel, Netflix, Electronic Arts (Need for Speed, FIFA) are too. Here’s the full list. Notice how most of that list consists of global companies, and not companies limited to the US for revenue.

To buy the best companies in the US, buying the Nasdaq 100 is a better alternative to the S&P 500

Investing in the Nasdaq 100

Indian investors currently have two ways of buying the Nasdaq 100. Both from the same AMC launching the S&P500 Index Fund.

Both these means are not great for tax unless held for the long term. All funds investing outside India are treated as debt funds. So tax at slab rate is applicable for holdings under three years. Long Term rate of 20% is applicable after indexation on units held over three years.

In an ideal world, the universe of available investments should not be restricted by the country where they or the investor are based.

Options for small retail Indian investors to invest overseas have been restricted to:

More passive investing options will help investors get lower-cost exposure to the most innovative companies in the world like  Amazon, Alphabet, Microsoft et al.

This in turn, should have the longer-term impact of Indian companies having to up their game to get retail investors to participate in their primary and secondary offerings. Imagine having the choice of buying ZM (Zoom Video Communications). versus a shady corporate governance play selling foam mattresses or home loans or what have you?

Indian businesses that have been remarkably consistently mediocre should start to wonder. Or maybe I’m being a little too optimistic?

Exposure beyond Indian shores is a necessity anyhow. The US is a good place to start, with exposure to the top companies. While the S&P 500 scores on costs and diversification, it is likely to be the tech stalwarts and relatively less of the financials/Oil and Gas companies that do very well after Covid. Our view is: Take geographical exposure, but the vehicle of the Nasdaq 100 is a better option than the S&P 500, and Motilal has a fund for the Nasdaq 100 as well.

Let us know what you think? Connect with us @capitalmind_in and @CalmInvestor

At Capitalmind, our Large-Cap Portfolio consists of a low-cost combination of the largest 100 Indian and US companies. A combination that has beaten almost every actively managed large cap equity fund. Subscribe to know more and access our equity and fixed income portfolios. Use Code RESET21 to get 21% off regular price.

The investment strategy that beats the average investor – II

NIFTY versus the Sectors

One thought on “Motilal Oswal’s S&P500 Index Fund: Should you Invest?”

👔 There's a whole new pandemic of “Advisory” services promising “guaranteed 100% per month” or “3% per day” or whatever abuse of compounding they fancy.

Do not let these "tips" services sucker you.

Today's thread has "tips" to deal with these "tipsters"🧵🧵

Contrarian investing works only if you’re ok being wrong 9/10 times.

One of the underlying reasons why momentum persists…

What do you say when you talk to yourself?

“Bayesians are concerned above all with uncertainty.”

Capitalmind Momentum in 2021 and thinking about luck and skill in 2022 https://www.capitalmind.in/2022/01/capitalmind-momentum-review/ by @CalmInvestor

“That mind can be free only when it is completely still.”